I will need to make a disclaimer for this week’s story. I have good friends who are policemen/women, and they are good, honest, caring, and the kind of honorable professionals who would truly give their lives to protect you. This story is NOT about them and should not be considered as my opinion of this particular profession. 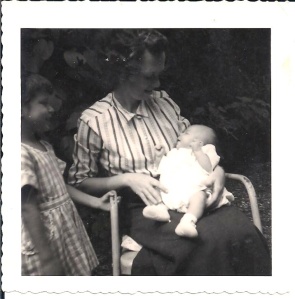 I DID NOT WANT HIM!! I was doing just fine being the baby girl, and then, suddenly, one day, they brought him home. They tell me that I went out to the carport, sat on the steps, placed my head on my arms, and sobbed my little heart out. At least that’s what I did until Grandma came out, scooped me up in her lap and arms, and whispered the words that I so badly needed to hear…”You can be my baby…” And that was that! My world was fixed for the moment. Of course, I was still going to have to deal with him…

As you can tell by the expression on my face in the photo, my feelings for the little fella changed…I grew to adore him. He ended up being “my baby,” and I have loved him all of his life. I am his fierce protector and friend…ALWAYS looking out for him and taking care of him….no matter how old he gets…and tomorrow is his birthday. He is four years younger than me, and do we have stories…

As most of you know, my Father was a minister, which made us four children “preacher’s kids.” Out of the four of us, my brother was the only one that rebelled against everything that he was taught. From the period of high school to early adulthood, he was into everything…especially alcohol and drugs. My parents tried everything within their power to help, guide, and attempt to get him to realize that he had a huge problem. After one too many incidents and car accidents, my Mother told him, “No more! If you are involved in any other type of altercation or accident, do NOT call me of your father. We won’t be coming to help you!” We knew they meant it! I tried to help him with everything that was in me, but it fell on deaf ears. I tried to get him to understand that there would be no “next time” with Mother and Daddy. I could not, for the life of me, understand how this precious child/young man, who I loved more than life itself, had gotten so messed up.

I happened to be home visiting with my folks on this particular weekend. My brother left for a night of partying with his friends. At 1:00a.m. Mother got the call from the hospital…my brother had just wrapped his car around a telephone pole, right at the entrance of our little town’s hospital. In fact, the hospital was using emergency generators, as his wreck had knocked out their electrical power. I found out later that the emergency room staff had been listening to the police chase on their radios before the accident occurred. Mother came to my room and woke me up with the news. She said, “I’m not going to the hospital. I told him that if he did not straighten up, I would not come the next time.” She was crying as she spoke the words. I was shocked, even though I knew it was the right decision, and she and Daddy had to stand firm. So I got dressed as quickly as I could, and dashed out to the hospital.

I got to the hospital and they let me in to see him as soon as I arrived. Fortunately, he only had a few cuts and bruises. God had spared his life one more time. He was crying for Mother, and I explained that she would not be coming. He cried harder, repentant and asking forgiveness…with both of us knowing that he would not change…At that moment, one of the policemen, who had been chasing him (quite a few times…not just this particular night) asked to see me outside. We stepped out into the darkness at the entrance of the emergency room. He brought out a little white bag of cocaine and said, “We found this in your brother’s car. I’m going to have to arrest him.” In that moment, I remembered that little baby boy being brought home, all of our loving times together, and now this policeman was telling me that he was going to prison. I then did something unexpected. I looked at that cop, and said, “NO! You are NOT going to arrest my brother! You are going to let me take him, away from this town, and you will never see him again!” He said, “You know I cannot do that. I have to take him in!” And I said, “If you arrest my brother, I will tell your wife (a friend of mine) about the affair you are having with…(and I spoke the name of the young lady with whom he was involved).” He knew I was speaking the truth, and that I would not hesitate to follow through. My heart was beating a mile a minute as I waited for his answer. He slowly put the bag of cocaine back in this jacket, and said, “Get him out of here!” I did!!

And as they say….the rest is history…I did take him away from that little small town, and he did live with me for a number of years afterwards. There were “slip-ups”…I would find the occasional bag of marijuana…he had my car impounded while I was away on a business trip…but the end result was what I was hoping and praying for. He ended up getting his life together. I got to introduce him to the lady who became his wife. Together, they have been ministers for most of their lives. A happy ending after all…He will never know the number of prayers that were whispered for him by literally hundreds of people…CONSTANTLY! He was given that “second chance,” and has worked hard to “make it count.”

Don’t ever say “never.” If you had asked me beforehand, if I would ever blackmail a policeman, I would have thought that you were out of your mind…preposterous! However, in that moment, realizing the ramifications of my brother’s choices, and how those choices were going to impact his future, I acted in the only way that I could…The only way that my heart and love would allow. (And just for the record, I found out about 10 years ago that my brother did NOT have any cocaine in his car, or on his person, that night. He had every other kind of drug, but not cocaine. It was a setup!) My message for this week is this: keep having hope and believing in miracles. Don’t ever give up! Remember, someone, somewhere is whispering your name in prayer…Won’t you join me? Just for this week….

2 thoughts on “No, HERE’S What We Are Going To Do, “Mister” Policeman…”