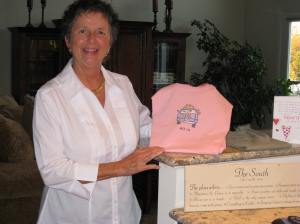 This week is my birthday week…so I have been reminded by many that it IS my birthday and, oh my, have we been celebrating!! Lots of good meals, getting together with friends, biking, hiking, and LOTS of LAUGHTER…I have never been one to be concerned with my age. After all, it is just a number. In fact, for two separate years, I actually was placing on documents and forms the wrong age…a year older…until a friend saw me do it, and reminded me of my current age. So…here are some “ponderings” on aging…

I have been asked many times, “When are you going to grow up, and act your age?” Oh, you mean like Nola Ochs, who at the age of 95, graduated from Ft. Hays State University in Kansas with a degree in History? Or like, Frances Woofenden of West Palm Beach, FL, who at age 81 was still competing (and winning in her age group) water skiing? That’s right…water skiing…Or like the woman, age 75, who was in line in front of me at Busch Gardens, with her daughter and granddaughter, waiting to board her last roller coaster of the day? (She had already ridden four, one of which was rated the #2 best roller coaster in the world!) Well…if that’s what you mean by acting my age, then yes! I will agree to do just that!!

What is the deal with aging, in that once you reach a certain age, or “look” a certain age, everyone begins treating you a little differently? Like you have morphed into a totally different person! The only thing that has changed is that you have been around for one year longer! Most of us are very thankful for that! We do not need to be treated any differently. We have not just “all of a sudden” become “cute,” “adorable,” “sweet,” or “little” anything!!! Don’t be condescending! Most of us could leave a number of you “younguns” in the dust!! Don’t assume that all the cells in our brains are not firing properly!

A friend of mine came to visit this past summer (she is two years younger than me). We had both been wanting to zip line, and I had found a wonderful one in the Smokies. Supposedly, the series of seven lines included one of the highest and longest in the United States. We could not wait!! We got there, and of course, we were the oldest ones in our group. Each time it was our turn to get “hooked up” on the line, the guide would say, “Come on up, young lady!” After about the third time, I had had enough! I very nicely turned around to our group and said, “See, another benefit of getting older…people say you are young all the time…” The guide never said those words to us again, and began treating us like the rest of the group members. And just as an aside, there were about fifteen people in our group, and we had to hike from one zip line to the next…straight up the mountain…My friend and I were always the first two to reach the next zip line, and we never broke a sweat or was labored in our breathing…unlike the rest of the “young” group!!

I get to teach this aging “concept” at a lot of conferences. I always tell people that if I was Cat Selman at ages 25, 35, 45, and 55…that I bet I will still be Cat Selman when I reach age 65 and 75!! I was at a recent conference where I had made that very statement. At break time I went into the restroom, and as I was washing my hands, I noticed that a woman kept staring at me pretty intently. She was staring to the point that I became uncomfortable and was wondering if I had toilet tissue hanging out of the back of my pants, or had lettuce stuck in my teeth, or ANYTHING!!! She finally came over to me and said, “You look marvelous! I cannot believe you are 75!!!” I looked at her with disbelief, and said, “that’s because I’M NOT 75!!!” But thanks for the compliment….

When I first started working in nursing homes, those precious elders would tell me, “I don’t feel old. I feel like I am still young.” I would always look at them and wonder, how can they not see that they have aged…that they really are old? I “get” what they are saying now. You DO feel the same, because you are the same…your body has just gotten a little more “worn for the wear.”

Let’s start treating older people just as we always have, because they are still the same individuals that we knew when they were younger. They are very unique, wonderful people who share a zest for life, with the experience of that lifetime, and always looking forward to the next adventure and challenge. So….I think I will act my age! Won’t you join me? Just for this week…